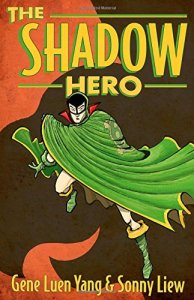 Ever wonder why superheroes are so good at dodging bullets? In The Shadow Hero, Hank Chu literally cannot be shot. That’s a deal he made with an ancient turtle spirit of China. Set in a pre-WWII China Town, The Shadow Hero is about a young Chinese American man named Hank who becomes a superhero. At the start of the story, Hank would much rather work at his father’s grocery store than get into trouble. However, after a series of events, including his mother urging him to become a superhero, Hank dons a green cape and becomes The Green Turtle. As a superhero, he fights the gang Tong of Sticks that controls San Incendio’s China Town. As the superhero convention dictates, Hank succeeds, though not as you would expect. Nothing in this book is predictable and the outcome will delight readers young and old. 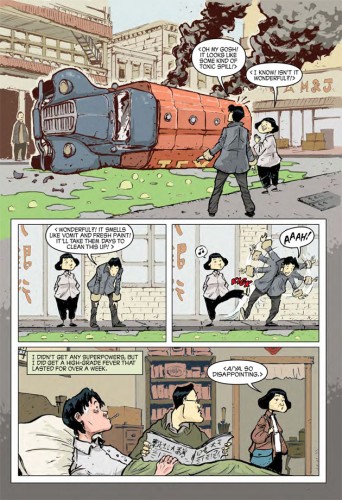 Because The Shadow Hero is a superhero story, the graphic novel format appears a natural and obvious vehicle for the narrative. One advantage of using pictorial narrative is that action sequences, especially fight scenes, can be dynamically displayed and characters’ emotions are powerfully expressed through facial and body language. For the most part, The Shadow Hero uses conventional comic trademarks such as rectangular panels and speech bubbles. What distinguishes this story from most superhero comics though, is its focus on Hank’s family and their Chinese heritage. Hank’s superpowers have a Chinese origin and his adventure is presented as part of navigating his Chinese and American identities. Another fascinating aspect of The Shadow Hero, is that Yang casts Hank’s story as a prequel to an original 1940s superhero comic, which might have featured the first-ever Asian superhero. A few pages from that comic are reproduced at the end of the novel, couched in Yang’s fascinating “Afterword.”
As someone who reads a lot of superhero comics, I found it refreshing to delve into a graphic novel with diverse characters and non-standard settings. The Shadow Hero challenges the norm of superheroes being white men and tweaks the convention in many other subtle ways. Its historical setting and intriguing characters make it a rewarding read for fans of comics, graphic novels, and literature that questions established norms.

Sarah is a CLA student whose hobbies include reading manga and appreciating cats.