The Fog Mound, is the first in a three-volume series, Travels of Thelonious, where the titular talking chipmunk named Thelonious, is joined by many other animals who talk and dress like humans. Including Fitzgerald, the porcupine, Olive the bear, and Brown the lizard, Thelonious and friends journey to Olive’s home, the mysterious Fog Mound, while uncovering the secrets of their strange world that resembles modern civilization but is devoid of any human life. The band of animal friends encounter many perilous and exciting challenges on their adventure, such as escaping from the legendary City of Ruins ruled by a Dragon Lady and trying to navigate their way home by the stars alone in a homemade flying machine.

The Fog Mound books are a type of graphic novels that blend a comic book style of storytelling in some chapters with purely textual chapters. The comic book chapters allow for further visual enhancement needed for dynamic action sequences and transitioning dialogue perspective. A good example is when Thelonious and Fitzgerald first go shopping for the chipmunk’s clothes in one of the abandoned stores. 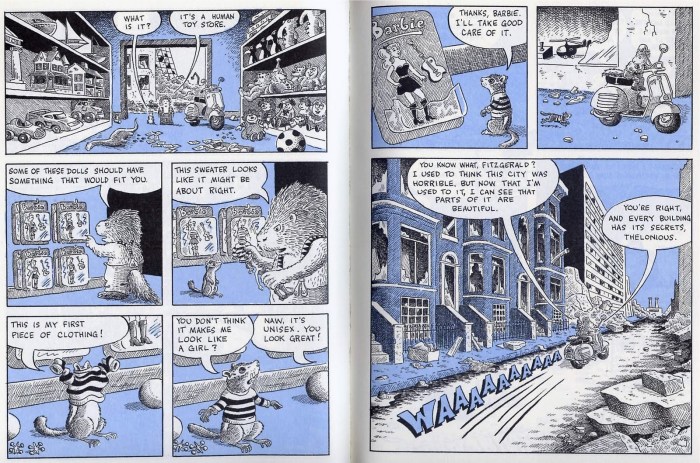 To show the speed of the scooter, as the two animals ride away, the comic style brings the dynamism out more than a textual description would; the motion lines and large font emphasizes the sound of the motor and just how loud it is, echoing through this empty landscape. The panels are drawn from the bottom-up perspective that highlights how small woodland animals are in the large human building. The illustrations are executed, with solid penciling lines combined with one color; the choice of light blue is easy on the eyes and offers sufficient contrast with the black and white shading. However, there are advantages to using the textual chapters as well. For instance, the book starts with Thelonious’ narration telling the myth about the City of Ruins. In this and other textual chapters, character dialogue is written for a more descriptive style to offer readers more details and background information and in much fewer pages than textual-pictorial narrative would require. With this explorative convention of alternating back and forth between the textual and visual sections, Schade and Buller create a very distinct narrative. The Fog Mound successfully tells a fascinating story that could not be accomplished without either format being used in conjunction with the either.

Casey Chang is a student at the University of Minnesota and lives by the tagline: Love Manga Forever