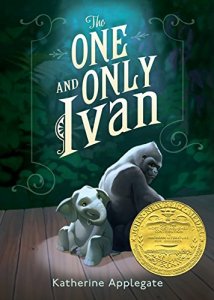 Katherine Applegate’s Newbery Medal winning animal fantasy novel, The One and Only Ivan is told through the perspective of its titular hero, Ivan, a 300-pound Silverback gorilla. Ivan is one of the main attractions at Exit 8 Big Top mall and video arcade, owned and operated by his caretaker Mac. For 27 years, Ivan has been content with his daily caged routine: enduring the occasional gawking visitor, swinging from his tire swing, watching TV, painting pictures, and chatting with his fellow caged neighbors, such a Stella a wise aging elephant who tells him stories, and Bob, a small stray dog who sometimes sleep on his belly.

Big Top Mall, however, is struggling financially, so Mac decides to add a new resident to the highway circus act, a wide-eyed, inquisitive baby elephant named Ruby. Stella soon becomes a mother like figure to Ruby, comforting Ruby as she struggles to adjust to her new surroundings. When Stella become sick, she makes Ivan promise to take care of Ruby and protect her.

Ivan reluctantly agrees, and his duty to protect Ruby brings out a part of himself that had long been suppressed by years of captivity: the mighty, protective nature of the Silverback. Soon Ivan is consumed by memories of being captured in the wild and separated from his family, especially his beloved sister, Tag. This event forced to confront the deplorable reality of his and Ruby’s imprisonment.

Applegate is a gifted storyteller, and she makes you care about Stella, Ivan and Ruby as much as any human protagonist. This book, with its brief chapters, widely spaced lines, and sparse but poignant language, read much like a novel in verse. Despite a slow start (the main conflict of the novel doesn’t begin until after Stella’s death), Applegate skillfully crafts a multi-layered story and a mesmerizing distinct voice for Ivan. The book never comes off as didactic; instead it provokes readers to think and question the relationship between man and animal. Patricia Castelao’s black and white illustrations, scattered throughout the pages of the novel, also successfully entice the imagination of readers without giving too much away.

All in all, this is a beautifully written book, with well-developed characters and some powerfully moving moments. I can see readers easily falling in love with The ONe and Only Ivan for years to come.

***
Lori Laster is a PhD student at the University of Minnesota.