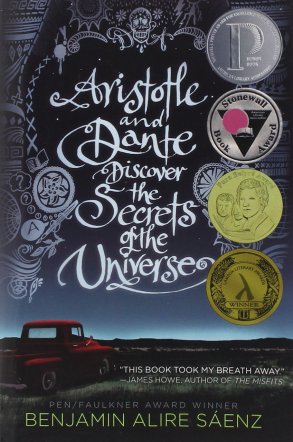 Benjamin Alire Sáenz offers a story of a sixteen-year-old Mexican American boy who struggles to understand himself and those around him. Aristotle’s, or Ari for short, is quiet and intimidating. His parents are pretty strict, but he doesn’t do much to test that. His life changes, however, when he meets Dante the summer before their junior year. Dante, although portrayed as physically weak, fights for things he cares about as if the world is ending. Together, Ari and Dante challenge one another to discover who they are.

Told from the point of view of Ari, the short chapters are filled with loaded words that paint each scene vividly. Being a quick read does not take away from the wholeness of the story but rather makes the reader want to immediately reread the entire book. Sáenz’s description of each character slowly becomes whole as if you are getting to know a stranger, and it is not until the end of the book that readers gain a full image of who each character is. It is clear that much thought was put into the structure of the book as a whole.

Sáenz’s story is beautifully multicultural. It deals with the intersectionality of identities that are not portrayed enough in young adult literature. Aristotle and Dante feel like characters I know–my friends, brothers, cousins. The emotional constipation, familial expectations, questions of sexuality, and many more topics are those that hit home for people with intersectional identities. In one episode, Ari and Dante get into a heated argument over who is a “real” or “more” Mexican even though both are Mexican American. This story is not an unrealistic portrayal of teen angst but tackles the complex reality of many living in this country.

This book was the catalyst to my journey of discovering literature that served underrepresented stories. It took me on an emotional rollercoaster, and I’m sure you will not regret buckling into your seat for this ride

Aristotle and Dante Discover the Secrets of the Universe. (2014). Benjamin Alire Sáenz. Simon and Schuster. 359 pgs.

Fadumo Haji-Aweis is a soon-to-be English educator and M. Ed. candidate. She loves languages, traveling, and can appreciate a book that can transport her to a different place and time.