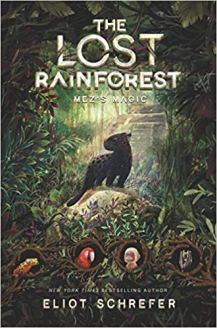 The mythic and exotic meet in Eliot Schrefer’s animal fantasy The Lost Rainforest: Mez’s Magic. Mez lives in a world divided between daywalkers and nightwalkers; as a panther, her kind sleeps during the day and wakes up only when the Veil has fallen over their diurnal counterparts. This is not the case for Mez, however; she is able to resist the Veil, roaming during both the day and the night. She soon discovers that she is not alone—there are others like her who have been granted special gifts. Mez, along with several new friends, embarks on a quest to stop the rise of the evil Ant Queen and save their forest.
Mez’s Magic is a conflicted novel. It takes place in a richly diverse world packed with forest creatures. The cultures of individual species are very much separate from each other; there is little interaction that isn’t predatory. Throughout her journey, Mez meets several creatures of different species and finds common ground; it is then thrown away at the novel’s climax in favor of placing Mez back with her own kind. The half-baked message of diversity and the heavy-handedness with which it is addressed ruins any semblance of emotional authenticity in interaction between these animals. However, for as far as it fails to accurately humanize them, the scientific specificity with which each species is addressed must be commended. Mez’s Magic is stuffed full of fun facts to let us know that, yes, Schrefer did do his research. Characters are represented very clearly and individually with animal qualities; as people, however, they fall just on the wrong side of exclusionary to be entirely accurate.

Anna Schwartz is a freshman who plans to pursue an English major and perfect the grilled cheese sandwich.