It is the year 1982, where a teenage girl sings to the lyrics of “Kids in America” by Kim Wilde as loud as she wants in the country of Iran. She wears her stylish denim jackets and tight jeans out onto the streets with no fear whatsoever. All of this would typical of western youth, but not specifically in Iran however. Who was this rule breaking teenager? Her name is Marjane Satrapi, the author. French-Iranian Marjane Satrapi retells the story of her childhood, starting at a time when the normal life as a teen suddenly disintegrates during the Islamic Revolution. Young Marjane who was naïve to the politics of war had to learn how to adapt to these changes as she witnesses how this enormous struggle affected her family and Iranian society itself. Persepolis is a story about her childhood memories of 1980 as seen 20 years later from the exact perspective. 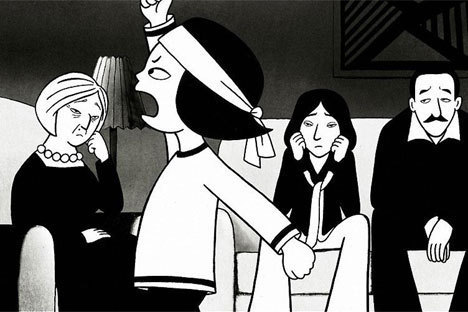 This autobiographical novel shows the growth of a rebellious teenager in one panel to the destruction of a country’s morale in the other. Lighthearted themes show more of Satrapi’s youth like sneaking in Iron Maiden posters that show the nostalgia of youth. Darker themes present more serious subjects like distrust among neighbors in a city of ruin using fine artistic details such as swooping cures and brisk lines. Simple, yet sometimes haunting details are used to show an incredible amount of history and emotion through seemingly black and white illustrations. For example, the portrayal of ghosts of those who were lost during a fire. The curving white strokes are effectively shown using the negative black background, thus making the image appear like a pictorial emotion unlike the main art style used for her narrative storytelling. This is a juxtaposition between the two contrasting colors to express the emotion of fear and tension of the events in that page. Persepolis’ simplistic artwork is helpful whenever it’s focused more on Satrapi’s youth, as it encompasses its cartoonish attribute of her lighthearted and carefree childhood. However, when the story expresses darker themes, the art style becomes increasingly detailed to place emphasis on the seriousness of the subject. Subjects like war or politics are drawn with fine lines and abstract imagery unlike the cartoonish art style, resulting in more attention given by reader. This piece of literature shows the power of storytelling through the perspective of an individual through the use of a seemingly innocent art style and is also a piece that encompasses humor to remind ourselves that this is a story of a childhood that also had cheerful moments despite dark events that happened in Satrapi’s past. While I first read Persepolis in grade school, the charming quality of the art and story had made me become eagerly invested as to how the story ends with flavorful characters and historical events.

Persepolis: The Story of a Childhood
by Marjane Satrapi
Pantheon Books, 2003
160 pages

Lalita is someone who enjoys drawing and taking commissions from time to time.