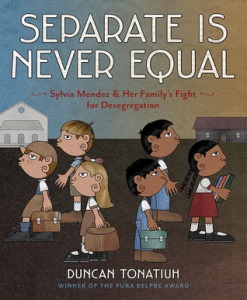 If you’re like me, you thought that the legal fight against segregation started at Brown v. Board of Education. Separate is Never Equal by Duncan Tonatiuh sets the record straight. In the Mendez v. Westminister School District case, 7 years before Brown v. Board of Education, Sylvia and her family successfully fought for her right to attend the same schools as white children. This inspiring story remains relevant today, not least because it’s been largely forgotten. In an afterword, Tonatiuh points out that de facto segregation continues today in schools. He calls for this segregation to end in a movement towards equality for students of all racial backgrounds.

Reinforcing the message of the story, Tonatiuh’s Mayan-style illustrations cue the reader to adopt an outsider’s perspective that may be as discomforting as the injustice it reveals. Separate’s illustrations sometimes shock the reader; for example, two brown children are shown eating sandwiches next to an electric, barbed-wire fence during their ‘lunch break.’ These images, along with powerful yet accessible language, communicate the inequality of Sylvia’s situation. The afterword reminds us that we, too, can make “meaningful contributions to this country” if we try (36).

I would highly recommend this for children in grades 2 to 5 as an introduction to an often-overlooked part of U.S. history that might just inspire them to change the world.

Anne is a Master’s student in English literature who thinks that cats may one day achieve world domination (or perhaps her cat master made her write that).