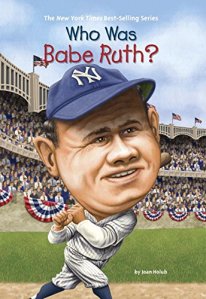 What player joined the league and changed the way baseball will be played for the rest of history? The answer is Babe Ruth. A troubled kid from Baltimore, Maryland became one of the most influential players in all of baseball history. He never lost his rough edge or his ability to hit the ball out of the park. Read about how a kid from a poor upbringing single-handedly changed baseball forever.

Who Was Babe Ruth? is quite successful in informing the reader of Babe Ruth’s pathway to success. The illustrations of this book enhance the reader’s experience with animated depictions of influential scenes throughout the story. This made the book much more enjoyable to read. While the book meets its goal, it sends hidden messages about bad behavior having few consequences. Personally, I would not put this book into my classroom as I do not want my students thinking that causing trouble will lead to success in life without many consequences. Yet, this is a great story of a troubled kid overcoming poverty and becoming a trailblazer.

Who Was Babe Ruth
by Joan Holub, Illustrated by Ted Hammond
The Penguin Group, 2012
112 pages