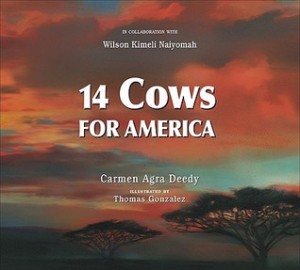 What can a small, proud culture offer the world’s largest cultural power in its time of unprecedented national trauma? Naiyomah’s tale is a poignant illustration of the universal human connection that can arise when a powerful story is shared.
Recorded in an interview by Carmen Agra Deedy, Wilson Naiyomah’s true story illustrates how and unexpected gift from a small village a world away may bring two cultures closer. Studying in America, Naiyomah returns to his village to share the catastrophe of 9/11 and its aftermath. As an acknowledgement of his grief, and the grief of all Americans, the tribe offers up 14 cows to be consecrated in honor of America’s loss. For the Maasai there is no greater possession than a cow, and the significance of this gesture is not lost on the U.S. diplomat Naiyomah invites to witness the consecration. Thus shared grief and sadness is turned to hope through a heartfelt gift, bringing to life the Maasai cultural wisdom: “to heal a sorrowing heart, give something that is dear to your own.”

The lifestyle of the nomadic, fierce, yet kind Maasai seems to be completely unlike that of modern America, yet no such barriers come between the characters in the story. There are differences in clothing and in language between the Maasai and Americans, which are wonderfully illustrated – realistically yet whimsically – full of color and movement that brings the words of the story to life. If you’re curious, you can watch an excellently produced read-through of the book here. But these differences are treated not as obstacles but as an opportunity to appreciate and support each other.

Dan is a tutor, librarian, and avid observer of all things wonderful in the world, especially a kind smile and a hearty laugh.