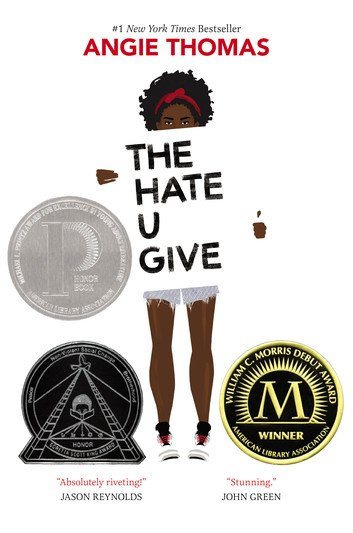 “Once upon a time there was a hazel-eyed boy with dimples. I called him Khalil. The world called him a thug.” Angie Thomas’ novel, The Hate U Give, tells the story of Starr Carter, a young, black woman, and her friend Khalil. Known around her inner-city neighborhood as “Big Mav’s daughter”, Starr attends a mostly white private school in the suburbs. She moves between the social demands of these culturally disparate venues with ease thanks to her mastery of code-switching. A fatal encounter with the police forces Starr to make a choice, take a stand for Khalil or try to preserve her delicately constructed identities.

Starr is hyper aware of how any action on her part could quickly land her into a
predefined cultural stereotype, like an ‘angry black woman’ or a ‘sassy black friend’. Through Starr’s interactions with the other characters in the novel, Thomas shows the variety of strategies we as a society use to achieve (or attempt) cultural harmony. Everything from colorblind denial of difference, to the embrace of a black cultural identity speaking out against racial injustice. Starr goes from a cautious teen trying to minimize the differences between herself and those around her to an advocate for her community and a person confident and comfortable with her own racial identity. Thomas advocates for embracing cultural difference by including hard conversations we tend to avoid, but Starr and her friends navigate these serious topics in a way that still feels authentic.

The Hate U Give
by Angie Thomas
HarperCollins 2017
464 pages

James Parker is a Graduate Student completing his Master’s of Education degree
and a teacher of high school English at Park High School in Cottage Grove.